skip to main | skip to sidebar

It's been a while. I think maybe I'll start updating with photos from skiing, since I'm taking pictures again. Here's one from today, bootpacking up Rector's Couloir in Thompson Pass, AK. 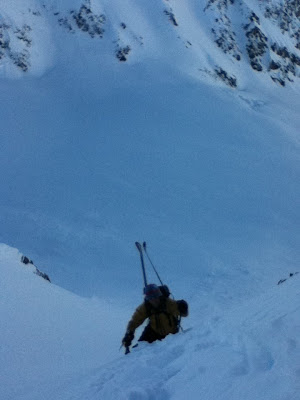 Here's another of Aaron on the next couloir over to the right. 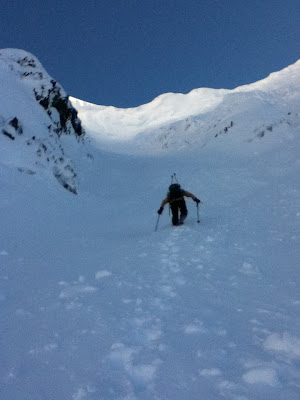 My inclinometer only goes to 50 degrees, and here's proof. 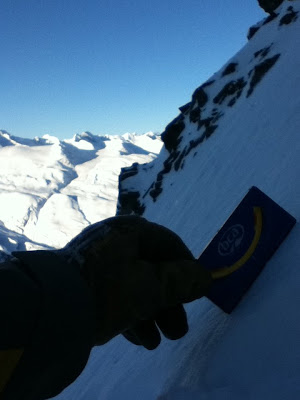 Posted by William at 8:53 PM No comments:

I've been getting some emails lately from Blogger about some of my posts, specifically the "Anarchy Breakfast Returns!" post, which is no longer online. Some organization called the IFPI alleges that my post contains copywrited material.

Although that page is no longer around, the Anarchy Breakfast podcasts are still hosted online. These downloads contain no individual tracks, just radio-style 30-minute playlists.

In the meantime, I will probably not post any more podcasts. Stay tuned for the fall, when I hope to be hosting the Anarchy Breakfast on KGLT, and will potentially re-start the podcast.

Enjoy the rest of the summer.
Posted by William at 12:26 PM 1 comment:

On a side note, Schlitz is impossible to find in Bozeman these days. We just have to settle for Old Milwaukee, or drive to the Midwest.

My sejour in France is coming to a close.

I don't have a ton of time, so I'll give a recap of my weekend in Esterel a little bit later. In brief, I went rock climbing on Rhiolyte (the volcanic form of granite) which climbed somewhere in between limestone and granite. I met a cool dude named Mika, who works as a "cordiste", that is to say he works at heights on a rope. He's a slackliner and has set up highlines professionally for outdoor sports festivals, among other things. Mika was excited to do some easy gear climbing, so I did that with him instead of trying hard stuff. He showed me (briefly) how to set up a really long slackline with pulleys and ascenders, and fun was had by all.

As a way of saying goodbye to this place, here's a list of French contributions to the world:

Tomorrow I'm heading towards Millau to do some rock climbing with Alfred, Kassy, Stu, and Guillem. There's a folk festival that we'll try to get to as well. It promises to be an excellent time.

As for the Anarchy Breakfast, I won't be able to put up a playlist before I leave. The podcasts may continue from Montana, but if I get a radio show things might change a bit.

It's been a lovely year. The sun is shining, like it has been for the better part of nine months, and it will be sad to leave the "gastronomie française" and all of the bulletproof limestone behind. But that land of milk and honey is calling me: The West. It's time for The Journey Home.

Au revoir, France.
Posted by William at 1:28 AM No comments:

2010 is turning out to be an exceptional year in music. Here are some records that I've been gushing about recently, in no particular order:

Tracks from these were all on my latest podcast, and they're all Amazing, with a capital A.

Also worth mentioning are Caribou's "Swim", a fantastic electronic record full of dancy rhythms and fun surprises, and Team Ghost's "You Never Did Anything Wrong To Me".

Team Ghost is one half of the French electronic duo M83, and every review points out that this EP logically follows M83's "Dead Cities, Red Seas & Lost Ghosts". This is a good thing, and it's a great EP full of atmospheric sounds and the rare pop-hook.

Titus Andronicus, a rather fatalist outfit from New Jersey, came out with "The Monitor" earlier this year. It explores everything that is difficult about life through the filter of the American civil war. It's harsh at times and the lyrics are frequently obscure. The record is interspersed with anthems about the futility of trying and laments for a style of life long gone. It's worth several listens, and at the end of each you'll feel like opening a beer and giving up.

These are all bands that I've been following in some form or another, and it's really gratifying to be so pleasantly surprised by the quality of these new releases. But this year has not been without a few disappointments.

The Hold Steady released a new record this year called "Heaven is Now". Their first four records followed a reasonably clear theme, mostly dealing with Catholicism and lost faith, put to the sounds of 80's rock and singer Craig Finn's barked "singing". It was raw on first listen and lyrically very interesting. But with their newest record the band has all but abandoned this theme and moved on to more personal (read: less interesting) topics. Finn honestly tries to sing, and the music has become more polished. The result is a derivative, boring, 80's rock record twenty-five years too late. And it's a shame.

Frightened Rabbit, a Scottish band, put out a record this year called "The Winter of Mixed Drinks". Their first effort, called "The Midnight Organ Fight", was like so many great records fueled by a nasty breakup and all of the emotions that come with it. It was honest, sometimes stripped down, and poignant. The most striking moments were the quieter ones. But the latest record comes from a much happier place. The band has packed in as much sound as possible into each track, and it shows. The poignant lyrics are gone and what is left is mostly obscured by the over-enthusiastic instrumentation. The record is draining to listen to and disappointing to finish.

As far as new (to me) music, I've recently been exploring and enjoying records by Groundation, an American reggae outfit, and I finally got around to checking out Crystal Castles. Their latest record (their second self-titled) got some good reviews, being labeled as more accessible than their debut. Crystal Castles makes abrasive electronic music filled with surprising twists, and in the right mood it can be amazing. For me, though, it definitely falls into the category of "music to listen to infrequently". Not something I'd put on before noon.

So far, however, the disappointments have been far outweighed by great output from established bands. We'll see what the rest of 2010 looks like, but so far it seems that the heavyweights of indie rock are striking back in a big way.
Posted by William at 12:43 AM No comments:

It's been a while, so today I bring you two playlists. Instead of the (by now) usual narrative, both playlists consist exclusively of music. The first is a collection of new music that I'm really excited about. Hence the title:

"New Music Makes Me Weak In The Knees"

But I do feel like I frequently (read: consistently, without fail) fall into the standard college-radio, All-Songs-Considered, pitchfork-media trap of "indie rock". So recently, just for kicks, I've been trying to expand just a tiny bit and I've gotten my hands on some reggae. It's fun to explore another genre. So this week, the "bonus" playlist is "The Anarchy Breakfast, Reggae Edition!" Listen to it if you're interested, as I certainly am.

Download Removed
Posted by William at 9:40 AM No comments:

Saint Guilhem le Désert is a rather particular area, as far as crags go. The medieval village is classified as a UNESCO world heritage site, and the area surrounding is is similarly protected. The village sees millions of tourists each year, and more than half of the surrounding cliffs are forbidden for climbing. Perhaps because of this delicate situation, there 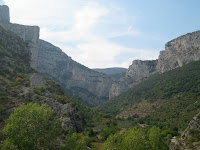 is no existing guidebook for the permitted climbing in the area. Luckily, Adrien has compiled his own topos and knows the area reasonably well. We went to a crag with mostly hard stuff. While Florent and Adrien wore themselves out on some of these overhanging monsters, Florence and I rappelled down to another cliff to try a longish traversing 6a. What I thought was a sport route, however, had only about six bolts in 40 meters. I threw the two slings I had over some bushes for extra (psychological?) protection, climbed carefully, and made a mental note to correct Adrien's topo sheet.

That night we made it to La Jonte rather late and set up our "bivouac". What the French called "bivouac" is basically what we think of as camping. As Adrien explained it to me, bivouac means 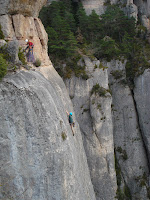 you set up the tent after dark and break down the tent at daybreak. "Camping" entails leaving the tent pitched, and usually means paying for a site. When we woke up the next morning we noticed signs nailed to trees that said, "camping - feux interdits". Oops. We weren't sure whether that meant no camping, no campfires, or neither, but we decided to sleep somewhere else the next night.

Les Gorges de la Jonte consist mostly of multi-pitch climbs on the 100-150 meter walls. The rock is Dolomite, a special type of limestone founds mostly in, you guessed it, the Dolomites of Italy. Dolomite forms cool, sharp pockets and irregular edges, and it's quite fun to climb on. The first Day Adrien and I did "Gallo Loco" a beautiful, well-bolted and over graded 100m climb, in about an hour. Then we attacked "Fais Caf c'est Dur", a slightly harder line of the same length and quality. We found a different "bivouac" spot by a picnic area and settled in.

The next day, my confidence boosted by the soft grades and large number of bolts on "Gallo Loco", I wanted to try "l'Arète Ouest". "L'Arète Ouest", graded 5c-6a-5c, is the local sandbag. With a bolt every six meters and sustained, steep climbing on pockets, it's a lot harder than it seems on paper. I took a 15 meter fall on the crux pitch and bailed. L'Arète Ouest: 1, William: 0.

Wanting to do something a little less physical, I joined up with Adrien the next day to do an easier gear climb called "Démons et Merveilles". The crack protected well and went smoothly.
At the top, we met a couple of Belgians named Thom and Stephane, also o 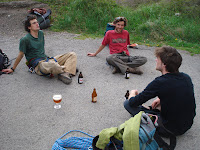 n vacation. They invited us back to their car for some beers. Florence and Florent went to do another climb, but Adrien and I decided to follow the Belgians. A climber has to know when to climb and when to drink. Our choice turned out to be a good one, as the Belgians were traveling with a cooler full of top-shelf Belgian beer. The four of us sat in the parking lot, talking half in English, half in French, for the better part of two hours.

Eventually the Belgians left for the long drive to go bouldering in Fontainbleau, and Adrien and I finished the day at a boulder called "Body Building", a 45 degree overhanging monster of a crag. After sufficiently destroying our forearms, we went to a spot suggested by the Belgians in the 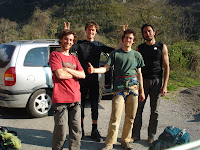 neighboring Gorges du Tarn (Lots of climbing there, also) which was perfect for our purposes. We slept hard.

Saturday, we were all beat. Adrien and I climbed at Body Building again, but quickly realized that there was no way we were going to send anything and gave up. Bodies aching, all four of us returned to Montpellier for some much-needed rest.


Coming soon: an Anarchy Breakfast double-header, with a twist.
Posted by William at 3:53 AM No comments: